The building is organized by two masses – the sleek core at the west and the glass office space at the east. The tower is defined by the intersection of these two volumes and wrapped by the diagonal structural system which, envelopes the core. Green spaces are carved from the initial masses to create an atrium, balconies, and gardens throughout the building. At the ground, an experience of the building begins with a grand lobby and culminates at a multilevel crow. The side core opens up large lease spans in the typical office floor and set ups spectacular views and a visual connection the park space beyond.

The tower design inspired by natural geometry found in nature, the tower structure is designed as a spiraling form that gently touches the ground and extends into the sky. The side core creates an efficient floor plate with large spans designed for flexibility and co-working space. The side core blocks heat during the day, allowing for a more visibly open office floorplate. The optimization of a solid massing on the west enables the office spaces to be in shade during the hottest parts of the day, reducing glare, increasing human comfort and allowing for expansive views to the east, north and south.

Building façade optimization focuses on balancing between solar heat gain reduction and daylight distribution within the building. The proposed high-performance façade with the iconic external shading system not only minimizes cooling loads. But also promotes visual comfort. The façade with full-height windows shaded by diagonal fins will reduce the overall solar loads while providing building occupants views of the infinite Bangkok skyline.

How your world is reimagined

One City Centre has reimagined the world in our office space to nurture employees’ lives, stimulate their brains, refresh their bodies, free their minds, and elevate their efficiency and happiness in their everyday working and non-working life. 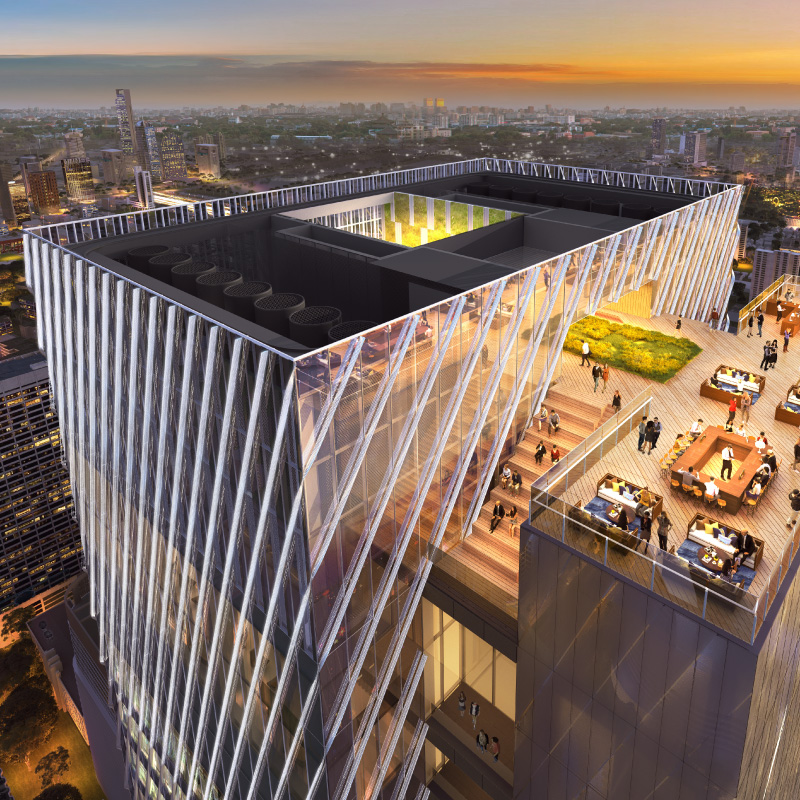 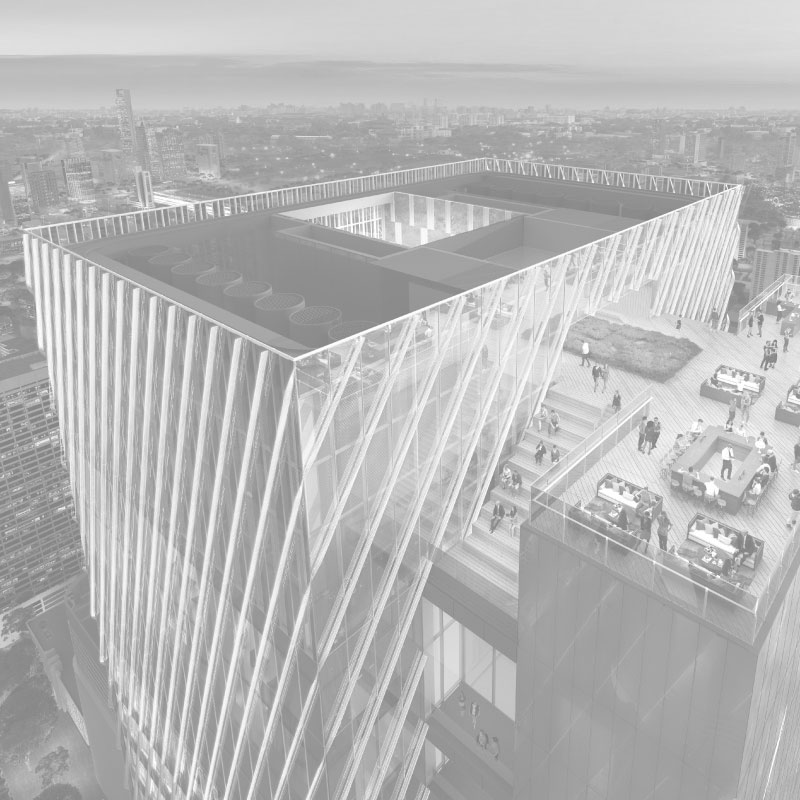 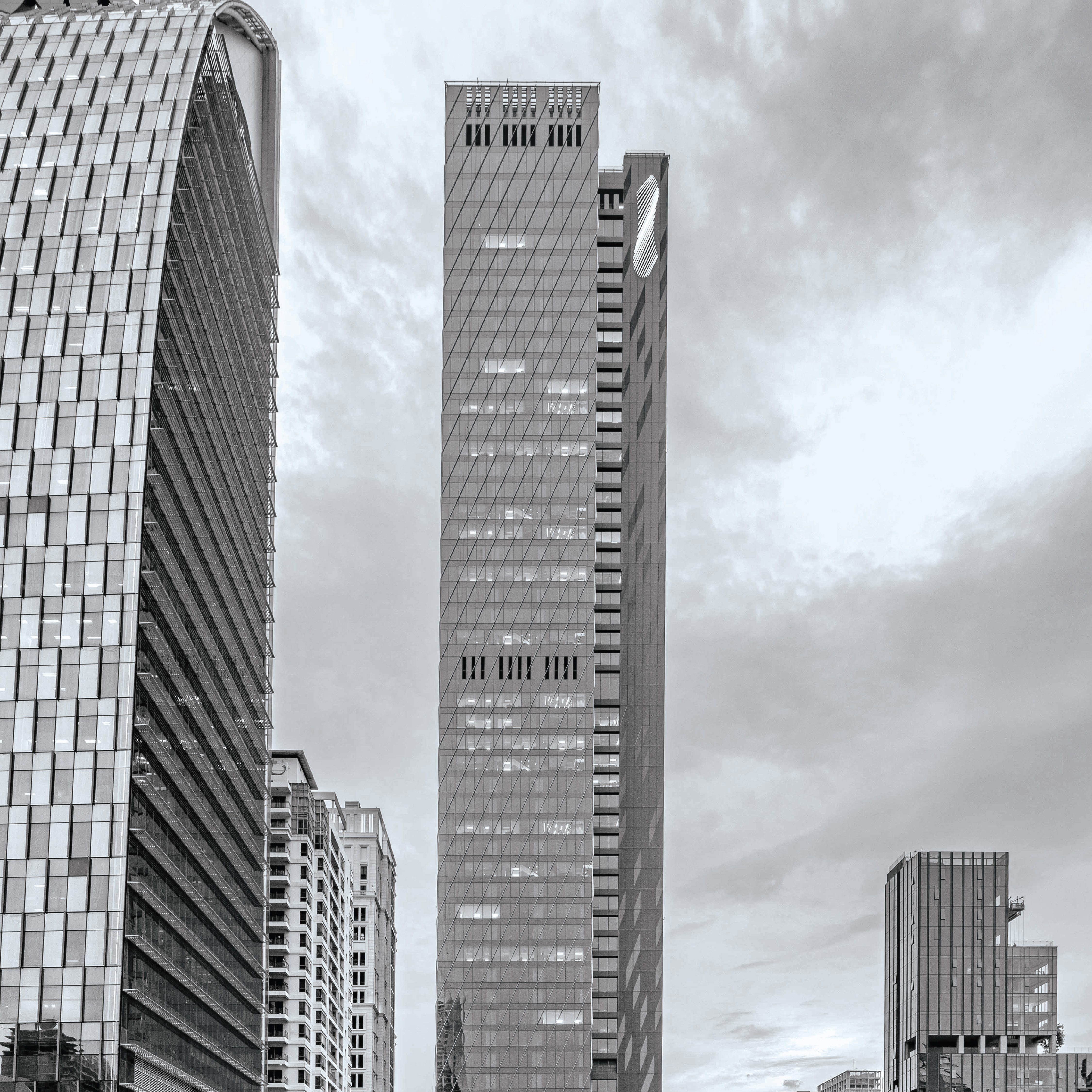 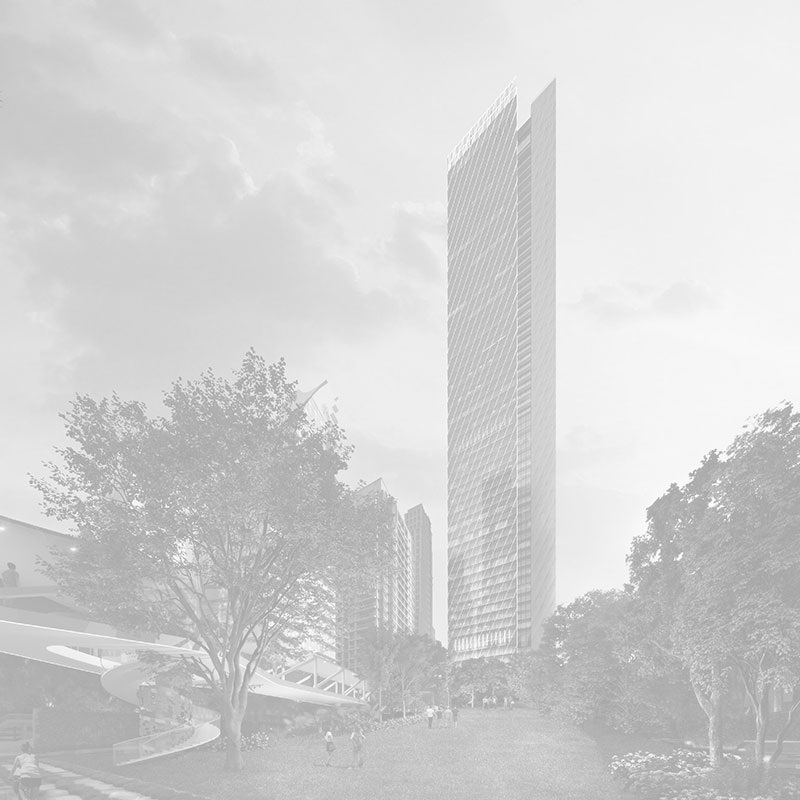 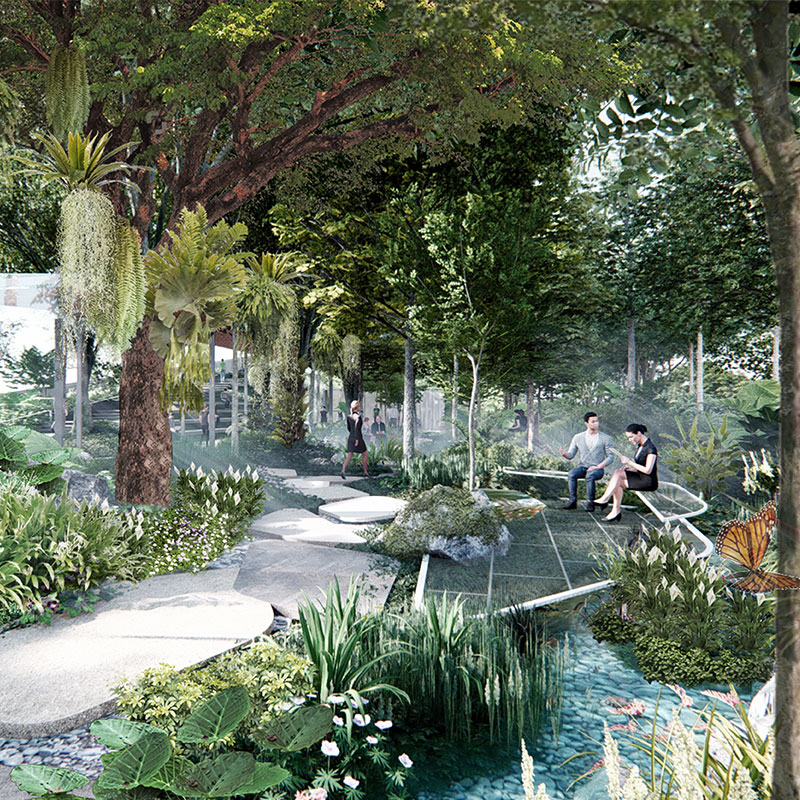 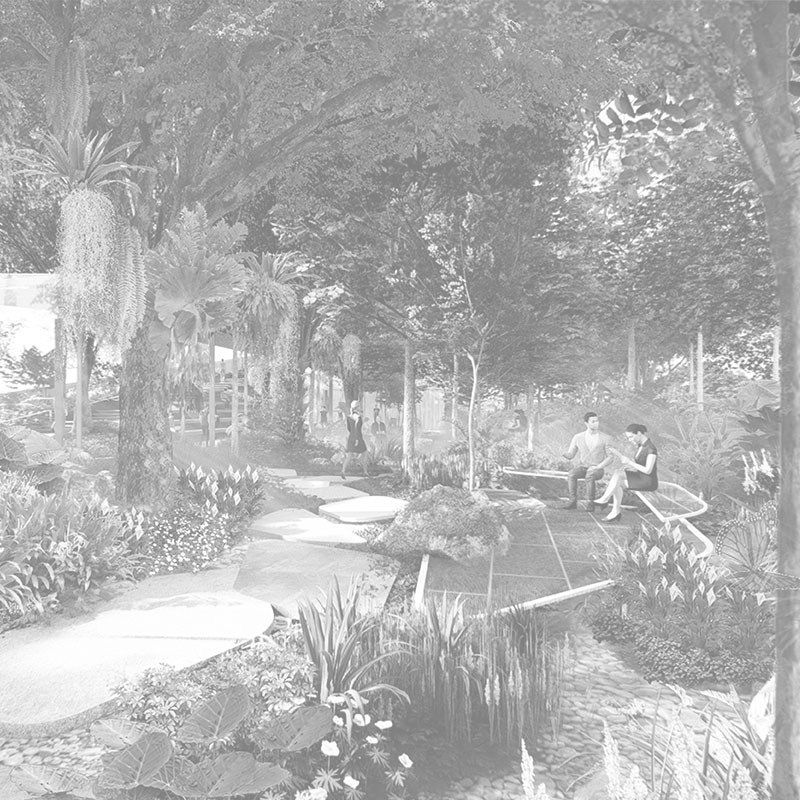 Urban life
with a lively vibe
a connected life with ease 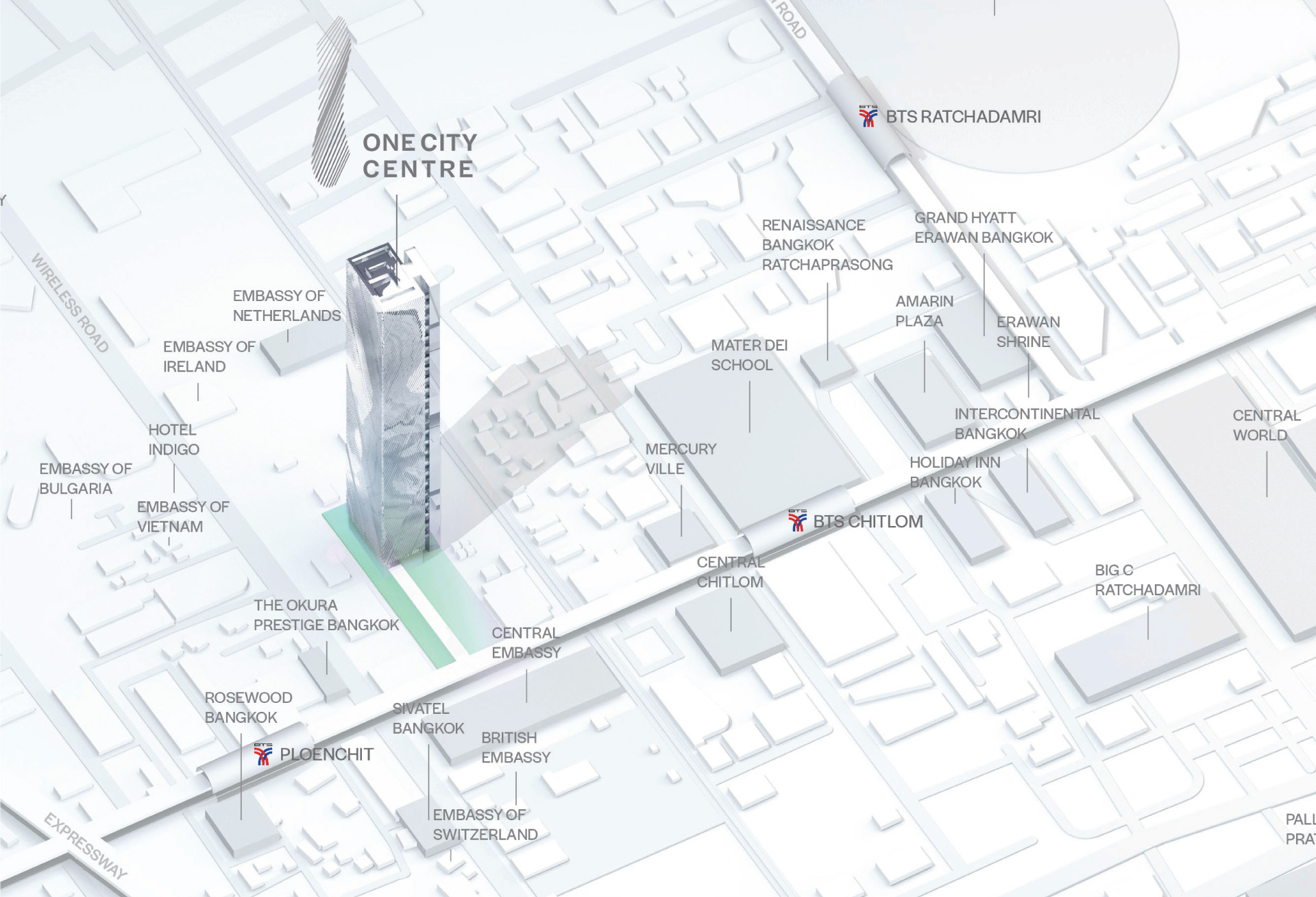 The great pact of two worlds

FOR THE PAST 32 YEARS, RAIMON LAND HAS BEEN ONE OF THAILAND’S LEADING REAL ESTATE DEVELOPERS WHICH FOCUSES ON DEVELOPING LUXURY RESIDENCES IN THAILAND.
Read more...
MITSUBISHI ESTATE IS JAPAN’S MOST PROMINENT AND PRESTIGIOUS PROPERTY DEVELOPER, ENGAGING IN ALL SPECTRUMS OF THE REAL ESTATE INDUSTRY, THROUGH ASSET CLASS, VALUE CHAIN AND ACROSS GEOGRAPHIES.
Read more...

THANK YOU FOR YOUR INTEREST IN ONE CITY CENTRE. PLEASE COMPLETE THE FORM BELOW TO ASK A QUESTION OR REQUEST INFORMATION. TO HELP US RESPOND, PLEASE SELECT THE TOPIC OF YOUR ENQUIRY :